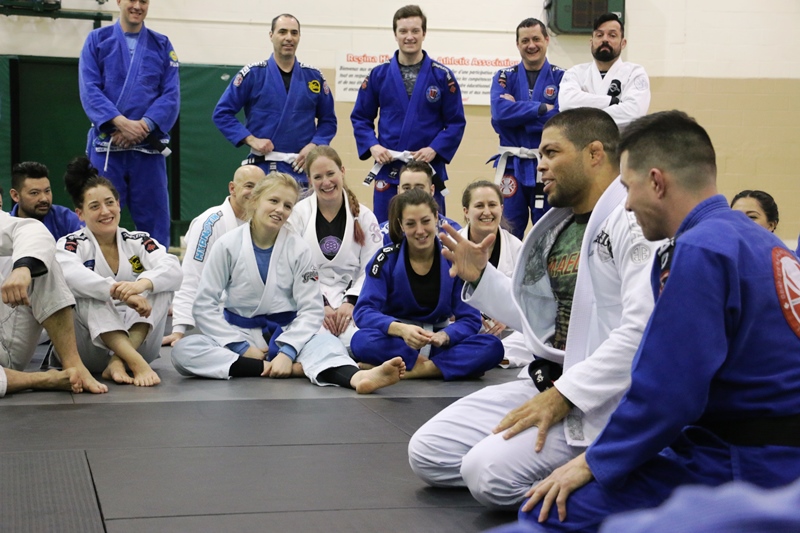 It’s not often that a Brazilian Jiu Jitsu (BJJ) teacher and practitioner at the level of Andre Galvao comes to Regina. In fact, it’s very rare.

It’s also a good indication of just how popular this traditional martial art is becoming in Saskatchewan.

Galvao, a third-degree black belt, conducted a two-day seminar at Campbell Collegiate in Regina, SK, from Mar. 17 to 18, 2018. The seminar was open to member students and instructors of the Saskatchewan Brazilian Jiu Jitsu Federation (SBJJF).

“Andre Galvao is a world-class BJJ instructor and competitor,” said SBJJF President Daryl Sveinson. “Andre brings such a wealth of experience, knowledge and BJJ skills to every course he teaches, that you cannot help but walk away a better student from one of his seminars, regardless of your belt level.”

Sveinson first contacted Galvao in early winter about the idea of coming to Regina to host a two-day seminar. Galvao, the head instructor at the Atos Jiu-Jitsu team in San Diego, California, USA, agreed, knowing western Canada is becoming a hot spot for BJJ in Canada. He also agreed, acknowledging that conducting seminars in places such as Regina benefit both the participants and the instructor.

“Right now people have a lot of access to Jiu Jitsu websites, online training and things like that. They really know Jiu Jitsu,” said Galvao. “Coming here to teach a seminar and roll with (the participants) can help take them to the next level. I think it’s really important for people to go to seminars. I think it’s also really important for teachers to travel all over the world, especially world champions, as they make the areas (where they conduct seminars) increase in Jiu Jitsu in many aspects in terms of the teaching, (promoting) the Jiu Jitsu lifestyle, and also improving how people teach Jiu Jitsu.”

Originally a student of Judo, Galvao transitioned to Jiu Jitsu following in his brothers footsteps. He then competed in his first tournament, and from that point on he was hooked. His journey took him from student and competitor, to trainer and mentor – a transition he is in the process of completing.

The 35-year-old Brazilian boasts a 5-2 professional Mixed Martial Arts (MMA) record, in addition to amassing numerous world Jiu Jitsu championships internationally – an aspect not lost on those who know and have trained with Galvao.

“Opportunities to learn from world-class BJJ instructors like Galvao do not come around every day, so when they do we need to make a point of participating and supporting these types of seminars,” said AJ Scales, Head instructor and owner of Complete Mixed Martials Arts and Fitness in Regina. “My students have become so accustomed to learning from our instructors, that having access to someone of Galvao’s caliber, with his own methods of teaching, new techniques and a whole new perspective to BJJ, is invaluable.”

The Saskatchewan Brazilian Jiu Jitsu Federation is always looking for ideas for future seminars. If you have an idea of someone you would like to see conduct a seminar in Saskatchewan, please submit your idea to: contact@saskbjj.ca.